I’m presently working on a paper criticizing the credibility of observational vaccine safety studies, with an emphasis on MMR-autism studies. The first part of the paper is a literature review documenting overlooked and potentially devastating sources of confounding and bias. The second part is a sensitivity analysis grounded in the literature review. The analysis illustrates numerically why existing MMR-autism studies are (at best) literally meaningless, as they would probably be incapable of detecting even a large autism risk owing to these flaws.

All constructive criticism is welcome. Subscribe to the comments thread at the bottom of the page if you wish to follow discussion on this research.

Fatal Flaws in Vaccine Safety Research: An Analysis of Confounding by Contraindication and Exposure Dilution Bias

The most important questions of vaccine safety are mostly addressed by observational studies. However, these require careful design and analysis to address many potential sources of bias and confounding. Two such sources which have received inadequate attention are confounding by contraindication (CBC) and exposure dilution bias (EDB). In studies of childhood vaccinations CBC occurs when children who have observable attributes that are associated with increased risk of adverse outcomes are simultaneously less likely to receive vaccines than are other children. This generally occurs because of parents’ perceptions that vaccines are not safe for their children with such “high-risk” attributes. Subsequently, adverse outcomes become concentrated in control groups, working to conceal any potential harms of vaccines, or even to produce spurious “protective” effects. EDB occurs if subjects in both the exposure and control groups have received other vaccines not under study that pose identical risks. The baseline pool of those susceptible to the adverse outcome may be shrunk due to harm from other vaccines, leading to a reduction in observed harm. EDB biases any true elevation in relative risk downward towards one.

I review the literature documenting the certain or near-certain existence of CBC in a variety of vaccine safety studies, with particular attention to at least 10 types of contraindications that stand to confound MMR-autism studies. I also document the likely existence of EDB in a number of contexts. I review efforts researchers have made to address these two weaknesses, sometimes successfully, and sometimes not. I document a pattern of conflicting results that suggest when CBC and/or EDB are credibly addressed, harms from vaccines are reported, and when they are not credibly addressed, an absence of those same harms or even protective effects are reported.

Fine and Chen previously derived a mathematical expression to model the effects of CBC in vaccine cohort studies. I enrich their expression to model CBC in greater detail, and to simultaneously model the combined effects of CBC and EDB in the context of MMR-autism cohort studies, demonstrating the sensitivity of reported risk ratios to both CBC and EDB. I illustrate using plausible variable values that in the event MMR and possibly other vaccines cause ASD that existing studies would very likely be incapable of detecting even very large risks.

Lastly, I offer four suggested observational study designs that reduce CBC and/or EDB. Most importantly among them is a retrospective design comparing fully vaccinated children to unvaccinated children in a manner that is ethical, probably feasible, virtually eliminates both CBC and EDB, and addresses concerns about differences in baseline characteristics between vaccinated and unvaccinated families.

I posit that CBC and EDB are the “elephants in the room” that render large swaths of vaccine safety research not credible.

This first image illustrates confounding by contraindication in MMR-autism studies: 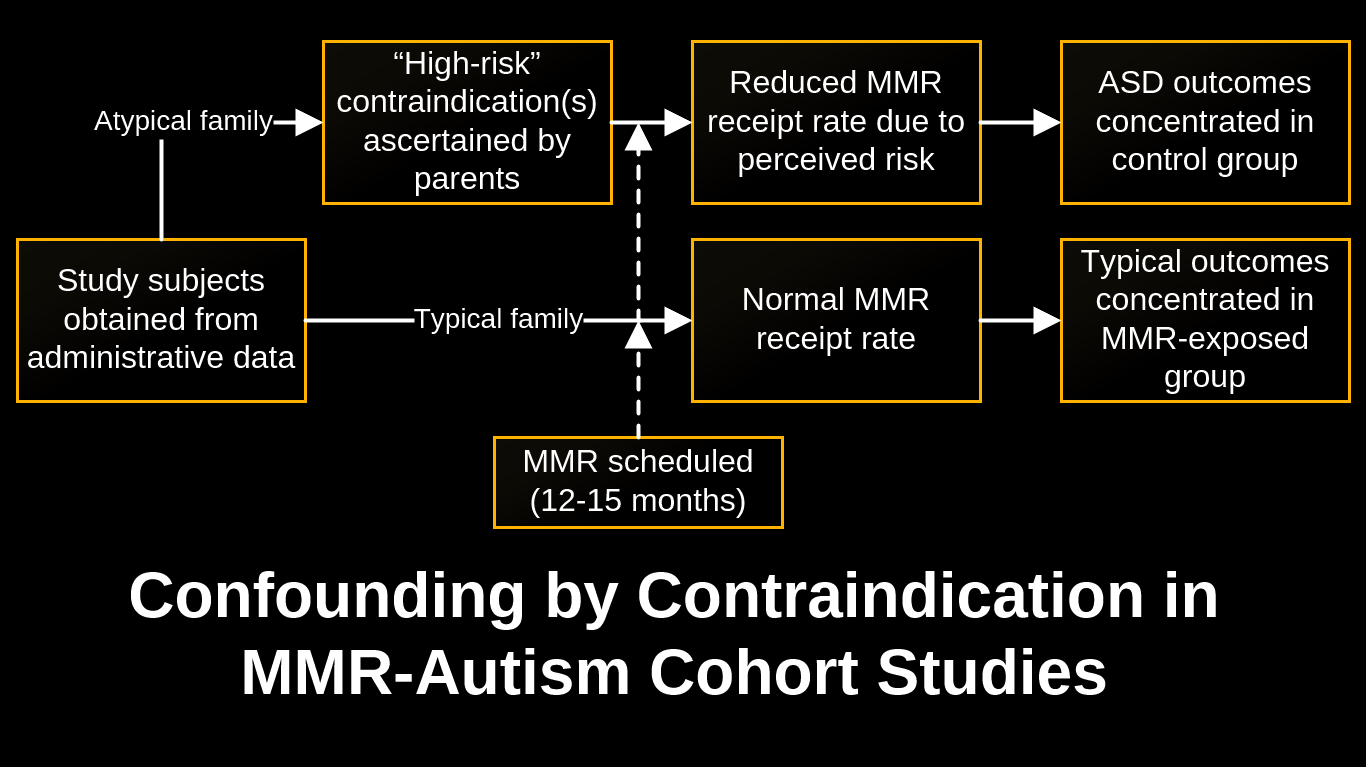 Children already at high-risk of being diagnosed with ASD are selected by their parents to not receive MMR. This concentrates ASD cases in the control group, thereby concealing risk. Note that atypical development refers to an entire family, and not necessarily just an individual child. For example, if a child has an older sibling with ASD, even though the younger child may not have any signs of ASD, this child is nonetheless at both increased risk of ASD (because autism runs in families) and at higher risk of skipping MMR. 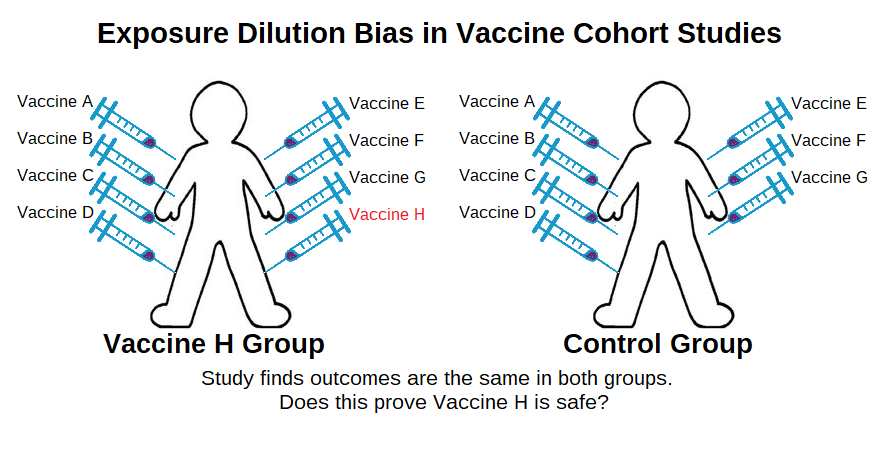 MMR-autism studies are potentially affected by this kind of bias. MMR is analogous to Vaccine H. For example, what if many of the people prone to being caused ASD by MMR would already be destined to receive an ASD diagnosis due to injury from other vaccines, regardless of whether or not they receive MMR? Studies could be comparing one cumulatively injured group of children to another cumulatively injured group of children, and hence find no risk, or a reduced risk, associated with MMR. These kind of vaccine cohort studies are based on the assumption that other vaccines not under study do not pose identical risks to the vaccine being studied. In general, this is an entirely unfounded assumption. Several plausible shared mechanisms by which multiple vaccines could cause autism exist. These include aluminum toxicity, detrimental immune activation, cross-reactivity, adventitious viral infection, and others.

I will be reviewing all of these examples in the paper.

Sneak Peak at the Paper and the Model

I have preliminary documents available to qualified persons, only for the purpose of inviting informal peer-review. I realize the mathematical model is over most peoples’ heads, but for those who are mathematically inclined, I am looking for serious criticism. To request the files, email [email protected], introduce yourself, and acknowledge that you agree not to distribute the files.

The paper preview is a portion of the overall paper. This particular segment reviews the literature that proves that children who are already at high risk of ending up with an ASD (autism spectrum disorder) diagnosis are also less likely to receive MMR. This is confounding by contraindication, and it results in ASD cases being concentrated within the control group of studies, thereby masking any real ASD risk that may be posed by MMR vaccines. If you need access to full texts of papers I cite, you can enter the papers’ DOIs into Sci-Hub.1–3

The model preview introduces an algebraic framework for testing how sensitive the results of MMR-autism studies are to the combined effects of both CBC and EDB. This is an enrichment of a simpler model derived by Fine and Chen in 1992.4 Fine and Chen model only CBC,  but not EDB. I model them simultaneously. I also enrich a number of details about how CBC is modeled to make it appropriate to the context of MMR-autism studies. They have 6 variables, whereas I am ultimately am going to have about 13 or 14 variables. For anyone who wants to understand my model, it is virtually required that they read the Fine and Chen paper first.

There are a a several things I need to fix or further develop with the paper and the model that I will be working on going forward. These are as follows:

I’ve been quietly working on this project for a long time, without pay, and am only about 50% done. Once it’s done, I think it can and will get published in a high impact journal. Make a donation if you wish to show your support. An increasing number of reputable journals are offering authors a choice between subscription-based access and open access. I will opt for open access, in which case the author(s) are expected to cover the fees of publication. This can range from $1000 to $5000.

Support Earth Med Research
Our work is possible because of your donations. Thank you.